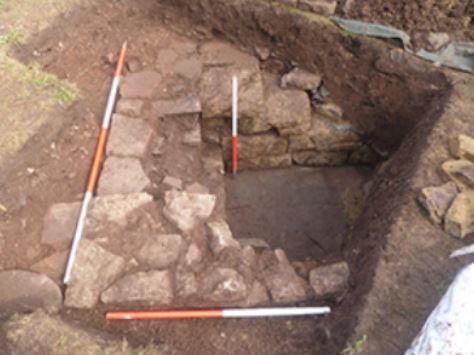 BACAS and the ARA (The Association for Roman Archaeology) were granted permission from Keynsham Town Council to reopen a single trench in the north stepped corridor of the Roman building in Durley Hill Cemetery, where steps were discovered by Arthur Bulleid between 1922 and 1924. Advice was obtained in consultation with Richard Sermon the Archaeological Officer for Bath and North- East Somerset Council, to confirm this area of the graveyard contained no burials and was not consecrated.

From Tuesday 29th to Thursday 31st August volunteers from BACAS and ARA reopened the trench where the steps were first recorded. We were led to believe that the trench was backfilled with gravel with terram pervious sheeting to help protect the steps and walling. Unfortunately, the trench was backfilled with a heavy and saturated mixed deposit of reddish brown and grey mottled clay, which contained pieces of pennant sandstone, pottery, CBM, Glass, FE objects, coin and tesserae, all Roman in origin. Also, some modern detritus was recovered.

Once the trench was excavated and the walls and steps partly uncovered (see figure) a GNSS system of recording was undertaken, the angle of alignment (degrees) was taken and recorded of the walls and steps, which clearly indicated that the published plan is inaccurately aligned. Consequently, the ornate corner room at the NW corner of the building and rooms G to N cannot be where they are shown on the 1926 plan. More detailed records will be incorporated in a larger future report once further investigations have been completed.