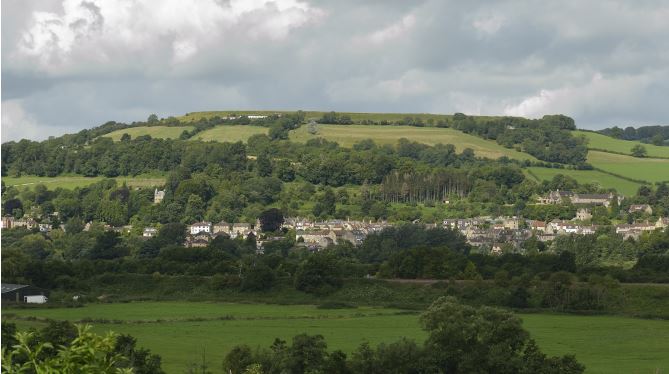 BACAS was a major contributor to the new online hillforts atlas, contributing about 20% of all the completed surveys for England.

The nearest hillfort to Bath is Solsbury Hill. This was thoroughly surveyed by BACAS a few years ago, and was found to contain over twenty dwellings, and some unusual features, such as a ditched enclosure. The society has also surveyed many hillforts in this region on behalf of the Hillfort Atlas Project, as mentioned in the November/December 2017 British Archaeology magazine.

Dotted across the landscape of Britain and Ireland, hillforts have been part of our story for millennia. The Hillforts Atlas captures all of their locations and key details in one resource.

With the help of citizen scientists from across England, Ireland, Northern Ireland, Scotland and Wales, a research team funded by the Arts and Humanities Research Council (AHRC) has spent the last five years sifting and recording information on all the hillforts across Britain and Ireland. They have discovered there are 4,147 hillforts in total, and have collated details for every one on a website that is accessible to the public – and completely free.

The team are drawn from the University of Edinburgh, University of Oxford, and University College Cork. Edinburgh’s Professor Ian Ralston, who co-led the project, said: “Standing on a windswept hillfort with dramatic views across the countryside, you really feel like you’re fully immersed in history. This research project is all about sharing the stories of the thousands of hillforts across Britain and Ireland in one place that is accessible to the public and researchers.”

This unique resource provides free access to information about world-famous sites as well as many previously little-known hillforts, helping ramblers, cyclists, naturalists, and local history enthusiasts discover all the sites in their local area. . Project co-leader Professor Gary Lock at the University of Oxford said: “We hope it will encourage people to visit some incredible hillforts that they may never have known were right under their feet. It is hoped that the atlas will help raise the profile of hillforts that are half-hidden and underappreciated in their local community.”

Mostly built during the Iron Age, the oldest hillforts date to around 1,000BC and the most recent to around 700AD. Hillforts were central to more than 1,500 years of ancient living: with numerous functions – some of which are yet to be fully uncovered – hillforts served as communal gathering spaces. The research also shows that, fascinatingly, not all hillforts are on hills; nor are they all forts.

Professor Alice Roberts of the University of Birmingham, presenter of Digging for Britain, and professor for Public Engagement with Science said “Hillforts are an astonishing reminder of the ancient past; monumental impressions left by our ancestors on the landscape. But some of them are more obvious, and more well-known than others. This new atlas draws on the latest research and maps over 4,000 hill forts – it makes this facet of our ancient heritage accessible to everybody.”

The online resource can be updated by the public via a wiki-style database, which also includes thousands of images from the public. Through the citizen science initiative, around 100 members of the public collected data about the hillforts they visited, which was later analysed by the research team. This process helped to develop the knowledge and skills of volunteers and enthusiasts.

The atlas database will also be accessible on mobile devices and as such can be used while visiting a hillfort. A paper atlas is also in development, to be published in summer 2018.

The URL for the online atlas is https://hillforts.arch.ox.ac.uk

For more information about AHRC, its research and impact see: www.ahrc.ac.uk