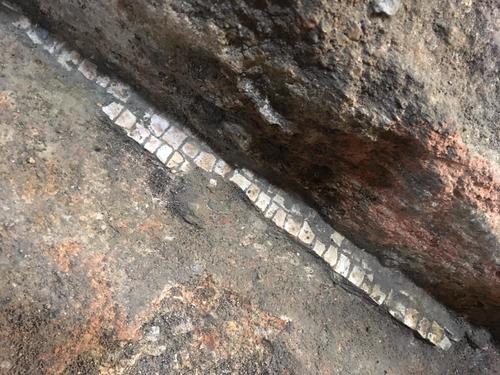 The earliest mosaic ever found at the Roman Baths in Bath has been discovered during excavations taking place in advance of the Archway Project, which will extend the public access into a new area of the site.

The mosaic was found by BACAS member Fiona Medland who is part of our team of volunteers helping professional archaeologists from Cotswold Archaeology to carry out the dig.

Fiona said ‘Finding the mosaic was the luck of being allocated “the sewer” to clean up. I thought it was just the edge of the door threshold until it dried a bit and showed all the individual tesserae. So I cleaned it up further and revealed a couple of rows, totally stunned. I have been helping BACAS for 10 years now, this is my first real find and a dream come true. Thank you all for allowing us to partake in this fabulous project, I know everyone has enjoyed it.’

The mosaic was found in the threshold of a Roman room. So far, just a few of the small cubes of stone that make up the floor have been uncovered. They are a creamy buff colour and are made from local stone. They are small in size, about 1 centimetre square, and carefully laid.

Stephen Clews, Manager of the Roman Baths said, ‘A mosaic in this position is likely to be plain or with only a simple geometric design. Although we only have a few cubes of stone to go on we can confirm that from its position in the building sequence this must be the earliest mosaic yet known from the site, dating to the later first century AD.

It shows that right from its inception the Roman Baths was furnished with all the trappings of a very fine establishment.

We will discuss with Historic England how we should approach any further uncovering of the mosaic.’

About the Archway Project

The Roman Baths is part-way through a major scheme – The Archway Project – to open up new areas of the site to visitors and to expand into buildings on the other side of York Street in Bath. As part of this project, BACAS is assisting with the excavations and interpretation of the archaeology of the site. BACAS is a partner of The Roman Baths on the archaeological component of the project and works alongside the selected archaeological contractors, Cotswold Archaeology. The majority of the funding for the project has come from the Heritage Lottery Fund; however, substantial funding has also been provided by Bath and North East Somerset (B&NES) Council, The Clore-Duffield Foundation and The Garfield Weston Foundation, and fund-raising continues.