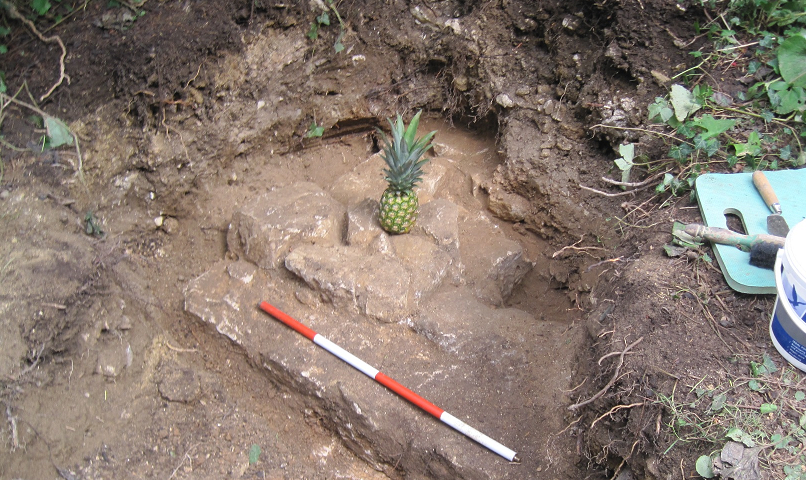 Ralph Allen, the Bath stone entrepreneur of Combe Down, built Prior Park Mansion in the 1730s and like many wealthy men of the time sought to grow pineapples in his garden. This rare and exotic fruit in Georgian times had become an essential feature of any proper dinner party and Allen took advice from Alexander Pope and others on the construction and operation of a Pinery at Prior Park.

Historical maps are conflicting over the location of this 18th century tropical greenhouse, showing it in slightly different places, but all close to the main house. Mention is made in correspondence of smoke from the pinery chimney which may be why it was later repurposed as a Bath house. Final demolition was sometime in the mid to late 1800s when the stone was used to build what is now the sports pavilion still in use at Prior Park College.

A geophysical survey in the National Trust Prior Park Garden by a joint team of Bath and Counties Archaeology Society (BACAS) and National Trust volunteers in 2019 pinpointed some likely spots where the building might have been and a series of test pits were excavated in August 2020 to try and find its location. The north east corner of a building was revealed showing wall footings of roughly dressed stone, the ashlar above having been taken away leaving apparent demolition rubble of bits of cut stone, mortar, glass, slate and nails behind as well as building debris apparently from other sources. This excavation was later extended to expose approximately 7m of the building footings. Another test pit nearby exposed a stone kerb and paved area.

A scale plan of the Bath House, which has been presumed to be a conversion of the Pineapple House, is shown on the Ralph Allen Survey map of 1761 described as a Cold Bath and comparison was made of the wall dimensions. From its position on maps and the survey plan it seems clear that this building has been the Pineapple/Bath House with the entrance steps at the central front door of the building. However, the excavated wall dimensions appear to be different to the plan which may be due to surveyor error or subsequent building redevelopment.

Further excavation of the kerb and its surrounding area showed a paved area covered by shallow top soil with no other features and only 20th century finds. The position of the kerb lines up with the edge of the original carriageway in front of Prior Park shown on the early 1888 25” Ordnance Survey which could point to its origin.

It is hoped to continue the excavations in 2021, subject to permissions and pandemic, to uncover more of the building and the possible carriageway.