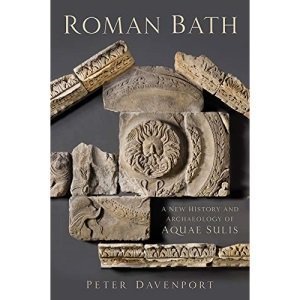 Peter Davenport has been heavily involved with the archaeology of Roman Bath for over 40 years. He arrived to assist Barry Cunliffe in the excavation of the temple precinct beneath the Pump Room and the nearby sacred spring. Cunliffe and Davenport then produced the report The Temple of Sulis Minerva at Bath (1985). Cunliffe also produced a more accessible account, Roman Bath Discovered, which went through three editions, the last in 2000. Many excavations have happened in the last four decades, and many (sadly not all) have resulted in reports. So knowledge of Roman Bath has grown but it lies fragmented in lots of different places. Someone is needed to join up all the dots and make sense of it all.

The is what Davenport set out to do in his book subtitled “A new history and archaeology of Aquae Sulis” and he has succeeded admirably. He starts with the Romans arriving at the mysterious hot water springs, the presence of the military, and the initial taming of the springs, and creation of baths and a temple. He describes the growth of the town, what little we know of the the people, and the surrounding countryside. He finishes with what is known about the end of Aquae Sulis and what happened afterwards.

For anyone who is trying to get to grips with Roman Bath, this book provides an excellent and useful starting point, and provides signposts to key sources. It helps particularly with understanding the sequencing of the baths and temple complex, though it does require some work to get your head round the interconnection of all the parts. Some familiarity with the Baths themselves would be a help.

However, it should not be read uncritically. It is inevitable that a fair portion of the book is based on supposition and it would be easy to come away with the impression that the existence of an early Roman military garrison at Bath was a proven fact when it is still a matter for debate. Davenport does say “the fort still eludes us” but it is clear on which side of the debate he sits.

BACAS gets a number of mentions in the book. Its founder, Bill Wedlake, is credited with being one of the pioneers of modern archaeology in Bath, and the society was the only body doing any rescue archaeology in the city in the fifties and sixties. The significant contribution of BACAS member Marek Lewcun (a professional archaeologist) to the excavations of the last two or three decades is acknowledged and a number of his site photos are included. There is even a brief nod to John Oswin and our geophysics work on Lansdown. Some recent discoveries failed to make it into the book though, including the Archway project, on which BACAS member Fiona Medland unearthed the earliest known mosaic in the Baths, on a dig led by Cotswold Archaeology in 2018.