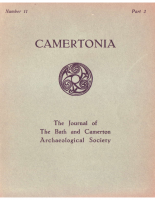 BACAS 18th Annual ReportW J Wedlake
Camertonia 11 Part 2 (1966) pp. 2 – 9.
Continued progress. Cessation of grant from Carnegie United Kingdom Trust. Comment on cost of re-conditioning the site at Wallmead. Largest contribution to success the efforts of members and volunteers, “let us now praise the sloggers and toilers in our Society, for without them we would soon revert to the old Victorian concept”. Bill Wedlake writes of first visit to Nettleton to buy the site huts left by Mr W C Priestley. “Over the door of the larger hut were the words NIL SINE LABORE – nothing without work. It would make a fine motto for this Society”. Excavations: Wallmead; Nettleton. Publications. Industrial archaeology. Lectures. Excursions. Local History and Archaeology Conference. Representations and affiliations. Headquarters. Rules. Future work. Ordnance Survey. Antiquities of the City – theft of the Head of Minerva. The late Alderman Dix. Thanks.

Treasurer’s Report 1966M F Jaine
Camertonia 11 Part 2 (1966) pp. 10 – 14.
Slight increases in the balances on the Nancy Smith Memorial Fund, the City of Bath Excavation Fund and the Publications Account. Thanks to British Academy for contributing again to the work at Nettleton and to members who have made donations. Thanks to Miss S Lloyd for continuing to pay Rates on the Headquarters