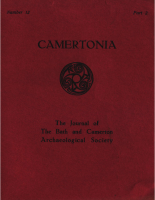 The Nettleton Report
Camertonia 12 Part 2 (1968) p. 6.
Hoped that this will be ready for publication this year. Sir Mortimer Wheeler has stressed the importance of the work being adequately recorded. Short piece here on the history of the site.

Excursions 1968J.M. Cooper
Camertonia 12 Part 2 (1968) p. 12.
Disappointing year perhaps as the result of so many more people being car owners. Two only excursions arranged. April, to Dartmoor and Exeter Cathedral, various Iron Age sites and Lydford Castle. In June outing was to the Malverns, including Tewkesbury, Pershore Abbey, Malvern Abbey and British Camp.

Subscriptions
Camertonia 12 Part 2 (1968) p. 15.
Hon Treasurer will be happy to send forms to any member who would prefer to pay by Standing Order.