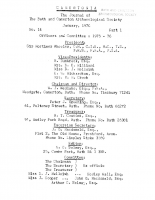 From a 13th Century Manuscript
Camertonia 16 Part 1 (1976) p. 2.
In April and May, when the fields and the hedges grow green again, and every living thing recovers its power, its beauty and its strength, the hills and its valleys echo to the sweet birdie’s songs, and the hearts of all men leap with joy for the beauty of the time and season. Then, too, should we remember the adventures and doughty deeds of men of old, our ancestors, who laboured loyally in quest of honour. Their lives may be a lesson to us’.

Excursions Secretary’s Report 1975J MacDonald
Camertonia 16 Part 1 (1976) pp. 7 – 8.
Six excursions this year. 16th March, Cirencester, Nympsfield and Uley. 22nd April, the Bristol Museum cellars. End of May week-end in SW Wales. July, Cricklade. August, the Cirencester excavations and September, Wells Museum. Joined in the afternoon, on this last, by members of the Somerset Archaeological Society for a tour of the excavation by Dr John Coles. Thanks to all Curators and Excavators who so freely gave up their time.

Publications
Camertonia 16 Part 1 (1976) p. 15.
Advertisement for the Camerton Report and the Two Miscellanies, with prices. 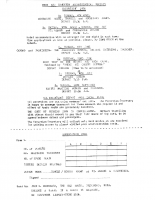