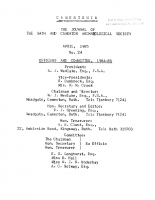 Annual Report 1984W J Wedlake
Camertonia 24 (1985) pp. 1 – 3.
Increasing economic difficulties having a depressing effect on archaeological research. The Western Archaeological Trust has gone into liquidation. Will mean increasing reliance on voluntary effort. Proud to remember the Camerton and Nettleton Reports – the results of years of voluntary/amateur efforts. But amateurs have come to feel unwanted. A scheme to help with travelling costs would be useful. Headquarters. Winter lectures. Summer evening excursions. HQ meetings. Parish surveys. Representation. Thanks.

Conservation Area Advisory Report 1984W J Wedlake
Camertonia 24 (1985) p. 5.
Items include the need for more toilets in the centre of Bath. Report on the Mowlem-Blakeney-Ireland and Podium site schemes which had both fallen through. Questions on Refuse Transfer Station, proposed to be built on the old Gas Works site. Entries invited for the Environmental Award scheme sponsored by Bath and Portland Group in 1983. Plaques and certificates are finally being awarded for the rebuilding of the Plummer-Roddis block in New Bond Street and the alterations to the tea house at the Holburne of Menstrie museum.