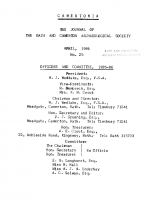 Annual Report 1985-86W J Wedlake
Camertonia 25 (1986) pp. 1 – 2.
Archaeological activity seriously curtailed in the South West by the closure of the Western Archaeological Trust. Re-iterating appeals for voluntary help. Important to ensure the solvency of the Society, so economies will have to be made, possibly in the sums paid each year to maintain contact with other societies. Winter lectures more and more expensive. Despite all this, a programme of visits to sites has been arranged e.g Danebury. Thanks to Miss Underhay. Evening sessions at Bennett Street well attended as was the Christmas party. Thanks to all who have assisted in any way. ‘ ..regret that increasing age has determined the amount of effort that I can give’

Conservation Area Advisory CommitteeBetty E Hall
Camertonia 25 (1986) p. 4.
Mr Stollar Chairman for 1985. Mrs Cross Deputy Chairman in place of Mr R Buchanan. Wide range of subjects. Extension to Conservation Area, a land strategy for Bath, riverside development, the monitoring of air pollution levels, more public toilets and litter bins and the use of pennant paving stones instead of concrete slabs. Model of proposed Podium site shown, after which the Georgian Society and the Bath Preservation Trust asked the Secretary of the Environment to refuse the application. Department of Transport has published proposals on Batheaston bypass and link road between A36 and A46. Discussion on effects on the City. New ‘carousel’ type telephone boxes installed in Upper Borough Walls and Kingsmead Square. BT have agreed to keep the old styles boxes where they adjoin Listed Buildings.

The Fortifications of Milford Haven and Pembroke DockE G Longhurst
Camertonia 25 (1986) pp. 6 – 8.
The history of the fortifications from Elizabethan times to the present.