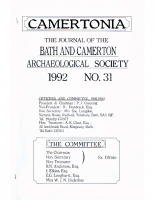 Chairman’s Report 1991P Greening
Camertonia 31 (1992) pp. 2 – 3.
Continuing work on Bill Wedlake’s papers. Mention of Dr Raleigh Radford. Thanks to Neil Anderson, the Excursions Secretary and to Ted Longhurst for the plan of the Abbot’s Hall excavations at Glastonbury. Sue Langdon doing an historical study of Radford. Hope that other members will consider doing similar work. Loss of Miss Dora Polkinghorne, oldest member. Left £100 in her will to the Society. The Christmas dinner will be at the Old Malt House at Radford. Thanks to Arthur Clout, Sue Langdon, and Neil Anderson. Win Underhay continues to provide hospitality for the meetings.

Excursion to Nympsfield and UleyN Anderson
Camertonia 31 (1992) p. 3.
A detailed report on the excursions – no dates given.