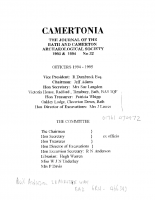 EditorialJayne Lawes
Camertonia 32 (1993-4) pp. 2 – 3.
Newly appointed Director of Excavations and Volunteer Editor for this issue, which covers two years of the Societies’ activities. Research at Stratton on the Fosse has begun. 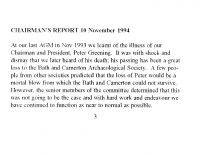 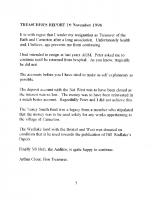 Last Report as ChairmanPeter Greening
Camertonia 32 (1993-4) pp. 12 – 13.
Last report as Chairman taken from the notes that he had made for the meeting and was unable to attend. Mention of new member Richard Maggs. Also Sue Langdon, Neil Anderson, Dave Higgins and Win Underhay.