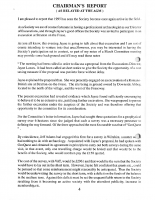 The Chairman’s ReportJeff Adams
Camertonia 34 (1996) pp. 4 – 5.
Membership 66. As relayed at the AGM. Details of a Committee Meeting held in March. Jayne Lawes working on site at Stratton on Fosse. Urges agreement to a three week training dig. Needs agreement to money up front for geophysics, some £2961. Jayne confident that some reimbursement anticipated through Grants etc. Also unquantifiable return from re-entry of Society into active archaeology and the resulting publicity. After discussion, the proposal was unanimously approved. Successful series of winter lectures and field excursions in the summer. The need for more publicity for the Society. Thanks to Committee Members, particularly Hugh Warren, Win Underhay and Patricia Whipp.

Excavations at Stratton on the Fosse 1995Jayne Lawes
Camertonia 34 (1996) pp. 10 – 11.
A survey of the work on the site this year with a greyscale of the Roman field system and a look to future plans.