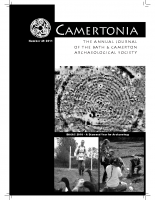 Chairman’s Report.Bob Whitaker MBE MA
Camertonia 49 (2011) p. 4.
Mention here of final year of excavation at Blacklands field, Upper Row Farm. Also mention of first year of training excavation at Homefield and geophysics at Stanton Drew. Tribute to Gordon Hendy and his invitation, 10 years ago, to investigate finds at the farm. End of 3 year Heritage Lottery Funded ‘Archaeology for all at Upper Row Farm’. 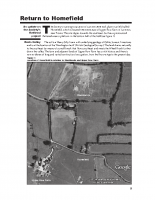 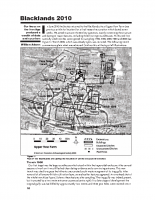 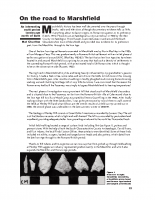 On the Road to Marshfield. An interesting multi-period landscape north of Bath. Mat Charlton.
Camertonia 49 (2011) pp. 15 – 17.
Field walking, geophysics and trial trenches on Henley Hill, including comment on the history of Marshfield and the geology of the site. Mention of Iron Mongers Piece, Colerne and Bury Wood Camp. 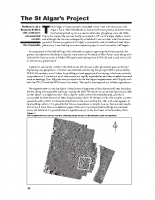 The St Algar’s Project. Fieldwork at a Romano-British site produces unexpected results. Ceri Lambdin.
Camertonia 49 (2011) pp. 18 – 19.
The first year of work on this site at West Woodlands, including field walking, geophysics and finds of glass and crucible sherds from an evaluation excavation. 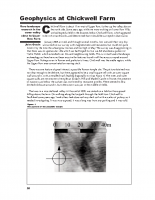 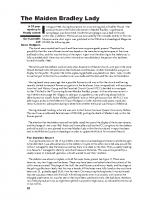 The Maiden Bradley lady. A 35 year mystery is finally solved.Ceri Lambdin and Dawn Hodgson.
Camertonia 49 (2011) pp. 22 – 23.
An investigation into a skeleton held in the church at Maiden Bradley, Wiltshire. 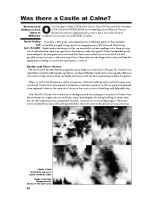 Was there a Castle at Calne? Research and Fieldwork from Calne in Wiltshire.Robin Holley & Lynn Amadio.
Camertonia 49 (2011) pp. 24 – 27.
A Report and Discussion on the results of geophysics and excavation on this site, including a detailed history of Castles and Tower Houses. Mention of Maiden Castle, Barbury Castle, Lower Brock Street, Winchester, Sulgrave, Northamptonshire and Nunney and Wardour Castles. 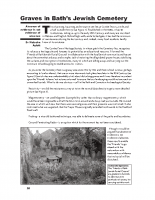 Graves in Bath’s Jewish Cemetery. Absence of evidence is not evidence of absence. Dr Malcolm Aylett.
Camertonia 49 (2011) pp. 28 – 29.
BACAS geophysics assisted the Friends of Bath Jewish Burial Ground at Combe Down in their task of restoring the prayer house and tombstones. 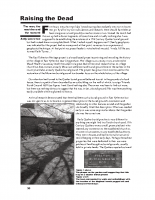 Raising the Dead. The man, the machine and the moment.Andy Lawrence.
Camertonia 49 (2011) pp. 30 – 31.
The East Tytherton Heritage Project is recording the history of this village near Chippenham. Mention of Maud Heath’s Causeway. This report records work on the Quaker Burial Ground, including the probable history of the site, Quaker burial practices and the results of the geophysics. 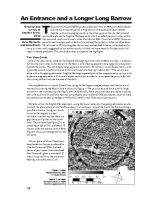 An Entrance and a Longer Long Barrow. Geophysical Survey at Stanton Drew 2010John Richards and John Oswin
Camertonia 49 (2011) pp. 32 – 35.
A detailed Report on the continuation of the work begun at Stanton Drew in 2009 with particular reference to the Cove and Stone Close. 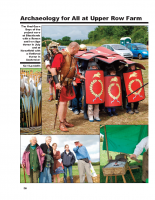 Archaeology for all at Upper Row Farm. Ceri Lambdin.
Camertonia 49 (2011) pp. 36 – 37.
The final Open Days of the project were at Blacklands with a Roman and Iron Age theme in July and at Homefield with a Medieval theme in September. Two pages of photographs record these Events. (see also p39 for Reports). 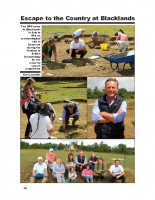 Escape to the Country at Blacklands.Ceri Lambdin.
Camertonia 49 (2011) p. 38.
The BBC came to Blacklands in July to film an archaeological site in Somerset during the Festival of British Archaeology for the property search programme. A page of photographs records the day. 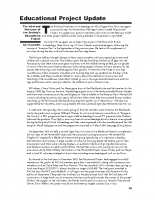 Educational Project Update. The third and final year of the Society’s Educational Project.Ceri Lambdin.
Camertonia 49 (2011) p. 39.
This summary includes the statistics for the whole project and particular thanks to the Educational Officer, Tavis Walker and the Hendy family. 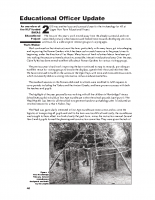 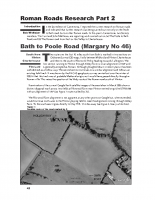 Roman Roads Research Part 2. Bath to Poole Road (Margary No 46). South from Hinton Charterhouse.Tim Lunt. Introduction by Bob Whitaker.
Camertonia 49 (2011) pp. 42 – 43.
A continuation, from Camertonia 2010, of current research on Roman roads. A detailed analysis of the route of this road for the first 10 miles south of Bath. Locations include references to Abbey Farm and Norwood Farm near Hinton Charterhouse, Midford, Norton St Philip, Lullington, Cley Hill, Shawford and Longleat. 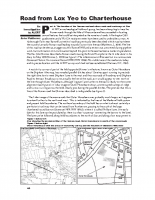 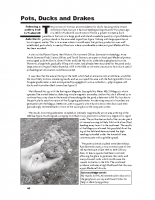 Pots, Ducks and DrakesJude Harris
Camertonia 49 (2011) pp. 48 – 49.
Following a pottery trail in Trudoxhill. A report on the search for and discovery of a post medieval kiln site. Mention of Wanstrow and East Somerset ware. 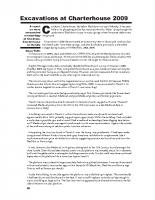 Excavations at Charterhouse 2009Steve Tofts
Camertonia 49 (2011) pp. 50 – 53.
A report on more unexpected archaeology at Cowleaze, Charterhouse on Mendip. Following excavations in 2007 and the English Heritage earthwork survey of 2008, a team from CHERT, BACAS and the Mendip Society returned to the lumps and bumps of this site. This is a detailed Report on this investigation and the results. 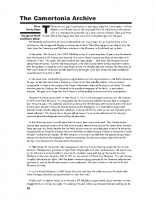 The Camertonia ArchiveMargaret Nuth and Owen Dicker
Camertonia 49 (2011) p. 54.
More early days. Continuing from 2010, these extracts from past Camertonias illustrate the struggle by Bill Wedlake to get suitable accommodation for finds in Bath. 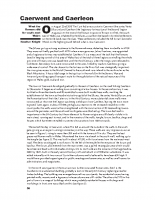 Caerwent and CaerleonHeather Knight
Camertonia 49 (2011) pp. 56 – 59.
What the Romans did for south east Wales. Boyd’s Mill and Castle Cary. 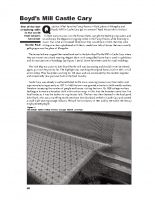 Boyd’s Mill and Castle CaryCarole Paul
Camertonia 49 (2011) pp. 60 – 61.
One of the last remaining mills in the world that weaves horsehair. 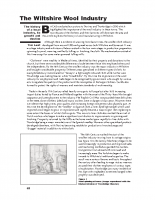 The Wiltshire Woollen Industry (Trowbridge and Devizes)Tim Lunt
Camertonia 49 (2011) pp. 62 – 64.
The history of a local industry, its growth and decline. 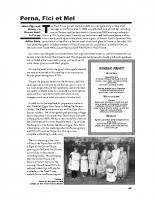 Perna, Fici et MelJulian Back
Camertonia 49 (2011) p. 65.
Ham, Figs and Honey – a Roman feast in Frome. The Food Frome project started in 2005 to promote local food heritage. Publications included one on Roman food (see Camertonia 2009). This article records the making of a film on Roman food made for the Frome Festival 2011. The article includes the menu for a meal which was the central event of the film. 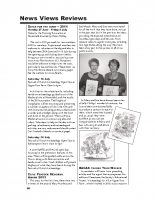 News Views Reviews
Camertonia 49 (2011) pp. 66 – 67.
The following items are included in these pages. Dates for the Homefield excavation for 2011. Dates for the Open Day at Upper Row Farm and for the Festival of British Archaeology Open Day at Bathampton Down. The winners of the Clive Peacock Memorial Award were Mary Huntley and Sue Woods for ‘ten years providing essential refreshments for countless open days and lectures’. BACAS thanks Tavis Walker. Ceri Lambdin. The Educational Project finished in 2010 and was ‘largely due to Tavis Walker’s work in the Educational Officer role.’ The article itemises the range of Tavis’ work and commitment. Book Review by the 2010. Clive Peacock Award Winner. John Oswin. The Stone Circles of Britain, Ireland and Brittany by Audrey Burl. 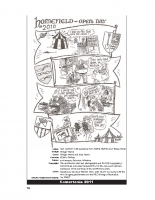