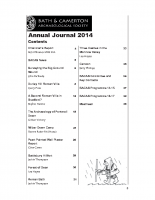 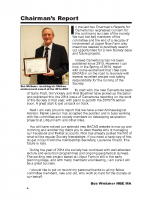 Chairman’s ReportBob Whitaker MBE MA
Camertonia 52 (2014) p. 4.
Recent concerns for the future of the Society have now been offset by several excellent people taking over responsibility. The new Camertonia team of Garry Pratt, Rick Buettner and Gill Vickery are joined by Marek Lewcun as Archaeological Advisor, Laurence Chadd as Membership Secretary and Jesse Hawke with the Twitter and Facebook Accounts. Mention of Lilliput Farm project. Thanks to all Committee Members.

News. Camertonia Update
Camertonia 52 (2014) p. 5.
Thanks to all contributors and volunteers. Clive Peacock Memorial Award. To Rick Buettner ‘for his exceptional work on the Little Solsbury project’ and many other aspects of his presence within the Society. Rick chose ‘Beacons in the Landscape: the Hillforts of England and Wales’ by Ian Brown for his award. Obituary: Keith Turner. Keith was a long standing and extremely active and inventive member of the Society, contributing to all facets, but especially remembered for those concerning technical and IT problems. Full obituaries for Keith were written by five of his friends and published in the August Newsletter. New BACAS website. Finally up and running at www.bacas.org.uk 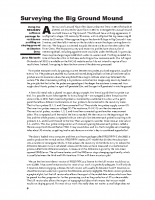 Surveying the Big Ground MoundJohn Richards
Camertonia 52 (2014) pp. 6 – 7.
The Big Ground Mound lies between Hautville’s Quoit and the River Chew at Stanton Drew. This Mound has a striking appearance. It is elliptical in shape, 125 metres by 90 metres, with its elliptical flat top measuring 40 metres by 25 metres. This paper describes how the RES2DINV software package was used to analyse resistance profiling on the Mound. See also Camertonia Issues 48, 49 and 51. 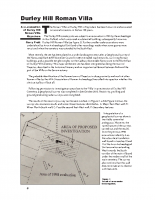 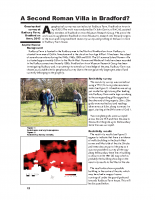 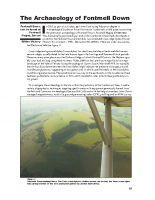 The Archaeology of Fontmell Down.Gillian Vickery
Camertonia 52 (2014) pp. 15 – 20.
Fontmell Down can be found at Fontmell Magna, Dorset. A full and detailed report of a field project on the pre-historic archaeology of this area. 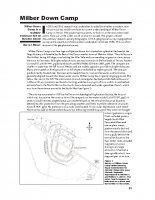 Milber Down Camp.Darren Baker
Camertonia 52 (2014) pp. 21 – 25.
Milber Down Camp is a multiple enclosure fort at Newton Abbot. This is an extensive project contributing to modern understanding of the Camp. 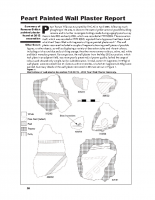 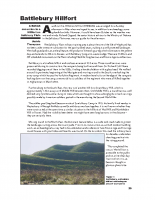 Battlebury HillfortJackie Thompson
Camertonia 52 (2014) p. 29.
A BACAS excursion to a Hillfort on Salisbury Plain. Details here of the history and archaeology of this site and the surrounding area 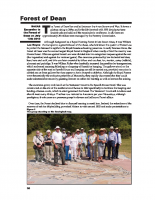 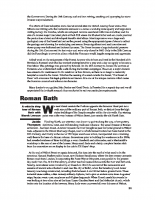 Roman BathJackie Thompson
Camertonia 52 (2014) pp. 31 – 32.
A Whistle Stop tour of Roman Bath with Marek Lewcun. A report on this Excursion around the city 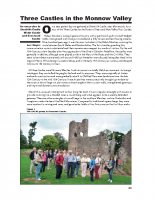 Three Castles in the Monnow Valley.Les Hayes
Camertonia 52 (2014) pp. 33 – 34.
An excursion to Skenfrith Castle, White Castle and Grosmont Castle. Les Hayes. A report on a ‘near perfect day’ 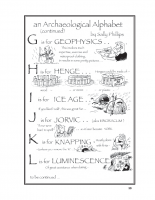 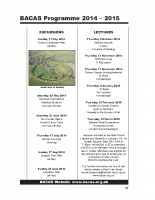 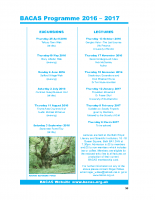