The views stated in the reports below are those of the author(s), not necessarily the Society’s unless otherwise stated. 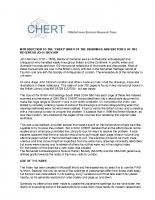 2012 Index of the Drawings and Sketches of the Reverend John SkinnerCharterhouse Environs Research Team
John Skinner (1772 – 1839), Rector of Camerton,was an enthusiastic archaeologist and antiquarian who travelled widely throughout Britain and the Continent. A prolific writer and illustrator he produced over 130 manuscript notebooks of his travels and discoveries 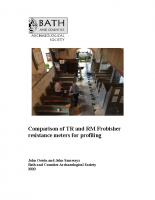 2020 Comparison of TR and RM Frobisher resistance meters for profilingJohn Oswin and John Samways
BACAS compared the TR/CIA resistance meter (old model) and the R M Frobisher TAR3 meter when used for resistivity profiles. The comparison was made in September 2019 in Cameley Church, Bath and North-East Somerset while taking a profile through the floor to look for vault spaces below. The report also compares the mechanics and sequence of the measurement methods. 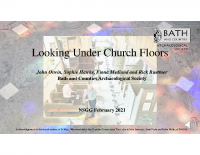 2021 Looking under church floorsJohn Oswin, Sophie Hawke, Fiona Medland and Rick Buettner
A novel technique has been developed to use electrical resistance tomography (ERT) to survey beneath stone floors. This presentation was given at NSGG’s Recent Advances in Archaeological Geophysics Conference, 19 February 2021.

Reports are ordered by site name, and then by publication date. 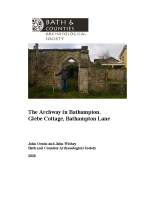 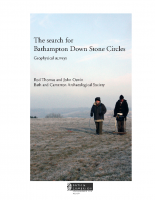 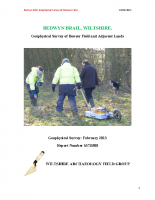 Bedwyn Brail 2013 Bedwyn Brail, Wiltshire: Geophysical Survey of Bowser Field and Adjacent LandsBrian Clarke and Robin Holley
Wiltshire Archaeology and Natural History Society (WANHS) Archaeology Field Group (WAFG) have been undertaking fieldwork at Bedwyn Brail since 2007, searching for the foundations of Edward Seymour’s mansion. During this period, other features associated with the house have been located, brick-built water conduits, settling tanks, a conduit house and cistern house have been observed. This project used several geophysical survey techniques in the area close to the cistern house and the results revealed an area of high resistence indicating the possible site of a building. 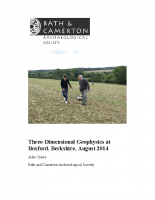 Boxford, Berkshire 2014 Three-Dimensional Geophysics at Boxford, Berkshire, August 2014John Oswin
The report describes results of extra measurements added to spectacular and extensive magnetometry and resistance surveys at a Roman villa site within the parish of Boxford, Berkshire. The principal technique tried in this report was ground-penetrating radar, over the area of the main building complex. A smaller portion of this area was also subject to more intensive radar coverage. 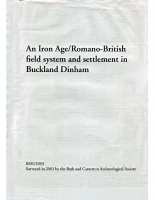 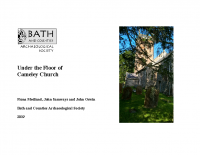 Cameley 2019 Under the floor of Cameley ChurchFiona Medland, John Samways and John Oswin
The 12th century church of St James Cameley is set in a fold of the Mendip hills, in the valley of the river Cam. Many of the Rees-Mogg family are buried in the churchyard, but it was believed that there was a family vault within the church. During recent geophysics at The Roman Baths, John Oswin had experimented with resistivity through stone floors and found it worked well. This could be the answer to discovering what lies beneath buildings without being intrusively dug. 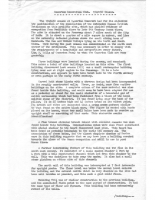 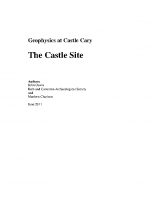 Castle Cary 2011 Geophysics at Castle Cary: The Castle SiteJohn Oswin and Matthew Charlton
A geophysical survey was undertaken during March and April 2011, which encompassed the castle site at Castle Cary, Somerset 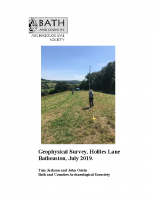 Charmy Down 2019 Geophysical Survey, Hollies Lane, Batheaston, July 2019Tom Jackson and John Oswin
On a spur half way up the hill leading to Charmy Down is an unusual mound which commands spectacular views across the St Catherine Valley. Geophysics on the mound in July 2019 suggested strongly that the mound was man-made, but was not able to provide a date for it. There is a possibility that it is a long barrow, but the feature could also be modern, and dating it would require excavation. 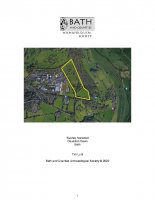 Claverton Down 2020 Bushey Norwood, Claverton Down, BathTim Lunt
Bushey Norwood is made up of two fields running alongside the east of Bath University. It contains some visible early field banks from the Bronze or Iron Ages including the site of a possible building enclosure first excavated by Colonel HD Skrine in 1888. At the southern end of Bushey is thought to be a Mediaeval or earlier Roman road that crossed from Claverton village to Bath. The geophysics survey was prompted by a conservation plan by the land owner, The National Trust, to plant trees but not to damage any early remains. While surveying the planting area the opportunity was also taken to survey other areas relating to the archaeological remains of the building enclosure, the field banks and the road. Results indicated the initial tree planting was unlikely to damage any remains and that the other survey areas warranted further investigation by excavation and/or further geophysics.

Claverton Down 2021 Flatwood Camp, Claverton Down, BathTim Lunt and David Stubbs
Flatwood Camp was used from 1892 until 1899 as the location for the 28 day summer camp of the 4th Battalion The Prince Albert’s (Somersetshire Light Infantry) sited in a field of that name on Claverton Down, southeast of Bath. Permanent buildings are shown on the 1904 25” Ordnance Survey map and a geophysical survey was carried out in August 2021 using magnetometry and resistivity equipment. 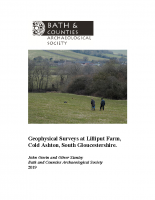 Cold Ashton 2019 Geophysical Surveys at Lilliput Farm, Cold Ashton, South GloucestershireJohn Oswin and Oliver Stanley
The southern slopes of Lilliput Farm, Cold Ashton, South Gloucestershire were surveyed between 2013 and 2018, and an area of approximately 30 ha was covered. The area was associated with personalities of the Bath cultural elite during the eighteenth century, who had an effect on the landscape, and prior to that had been on the periphery of the Battle of Lansdown during the English Civil War. Its boundaries in the south correspond with county and Saxon charter boundaries, and there were barrows taking the landscape back to prehistory. The report describes the geophysical surveys of each of the fields (magnetometry, twin-probe resistance and in some cases, resistivity profiling) in turn and then considers the whole landscape. There are two annexes. 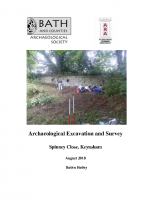 Durley Hill 2018 Archaeological Excavation and Survey, Spinney Close, KeynshamRobin Holley
A geophysical survey was undertaken by BACAS across the middle to top half of Spinney Close Keynsham in January 2017. At the time of this survey a large stone wall was observed crossing the northern end of the field, mostly obstructed by dense undergrowth of bramble, elder, blackthorn and large amounts of modern detritus. This wall was described by residents as polygonal in shape and was probably part of a large enclosure. Bryn Walters from ARA thought this wall was Roman in construction and worthy of further research and investigation. 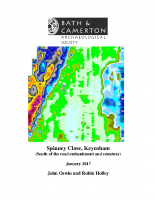 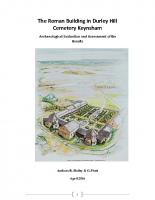 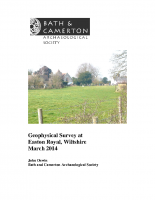 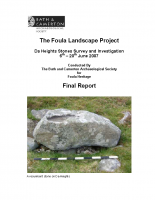 Foula 2008 The Foula Landscape Project: Da Heights Stones Survey and Investigation, 6th – 20th June 2007John Oswin, Jayne Lawes, and Keith Turner
In June 2007, at the request of John Holbourn and Foula Heritage, a small team of BACAS members went to Foula. The aim of the team was to investigate a sub-circular feature discovered in 2006 on Da Heights at the northern end of the island. The team located buried stones by probing the peat and recorded the location and shape of both these and the visible stones. In all 290 stones were recorded 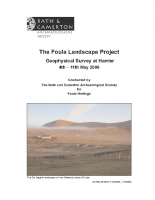 Foula 2006 The Foula Landscape Project: Geophysical Survey at Harrier, 4th – 11th May 2006John Oswin, Jayne Lawes, Keith Turner and Bridget Hetzel
At the instigation of Foula Heritage, BACAS undertook an eight day geophysical survey in the region of Harrier, on the Shetland island of Foula, during May 2006 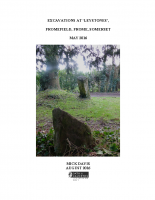 Great Bedwyn 2021 Geophysical Survey Report: St Mary’s Church, Church St, Great Bedwyn, Marlborough SN8 3PE WiltshireRobin Holley and John Oswin
BACAS undertook a geophysical survey of the floor of St. Mary’s (choir, chancel, and sanctuary), they also surveyed a strip of the churchyard projecting from the south side of the building. The aim was to try to locate the walls and floors of the Saxon buildings thought to be under the existing building and, secondly to identify the positions of tombs, vaults or graves. 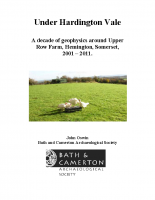 Hemington 2015 Under Hardington Vale: A decade of geophysics around Upper Row Farm, Hemington, Somerset, 2001 – 2011John Oswin
Geophysical survey of the area centred on Upper Row Farm in the eastern part of the parish of Hemington in Somerset started in 2001 alongside the excavations on Blacklands. Many fields within an area about 0.5 km square were subject to both magnetometry and resistance survey, and a number of outlying sites were also investigated. The survey covered a decade in time. The picture derived from the complete survey gave a good idea of prehistoric, Roman and medieval activity in this area. 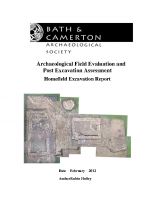 Hemington 2012 Archaeological Field Evaluation and Post Excavation Assessment: Homefield Excavation ReportRobin Holley
Between 2000 and 2011 a series of evaluations, which included a geophysical survey followed by a number of excavations took place in Homefield, Upper Row Farm, Hemington in Somerset 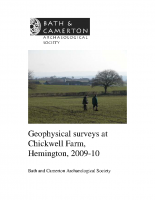 Hemington 2010 Geophysical surveys at Chickwell Farm, Hemington, 2009-10John Oswin
Geophysical surveys were carried out around Chickwell Farm, Hemington, Somerset, between January 2009 and March 2010. Two areas were investigated: a field below the farm, referred to as ‘Cat’s Tails’ and fields above the farm referred to as ‘Pentagonal’ and ‘Chickwell Moor’. The surveys showed traces of ancient field boundaries which are visible as earthworks on the ground. They also showed a possible Roman temple site. 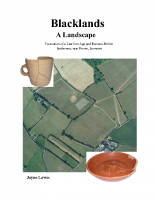 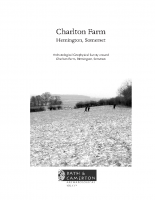 Hemington 2006 Geophysical Survey at Charlton Farm, Hemington, SomersetJohn Oswin
A number of fields in the vicinity of Charlton Farm in the parish of Hemington, Somerset have been surveyed by geophysics to investigate the archaeology. This has been done as part of BACAS’s continuing Blacklands Project, centred on nearby Upper Row Farm. 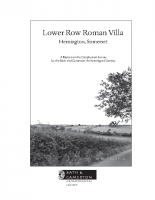