Saltford, Coffin Field 2020 Coffin Field, Saltford, near Bath, 2nd Season of Archaeological Field Evaluation and Post-Excavation Assessment of Finds and ResultsRobin Holley
An excavation at the southern end of a field lying to the south of Keynsham Manor, Manor Road, Saltford was carried out jointly by BACAS and the Saltford Environment Group (SEG) in September 2019. 11 trenches were dug in an area near to where a Roman coffin was discovered in 1948. A previous, more limited, excavation was carried out by BACAS and SEG in 2018 when a single trench was excavated. Geophysical surveys had identified anomalies which suggested that there might be a structure or structures in the vicinity, probably of Roman origin. Although numerous artefacts, including several coins, were recovered, the excavations failed to find any evidence of a building or other structures. The recovered finds do suggest that there may be a structure, probably a farm, possibly to the west of the 2019 excavations. 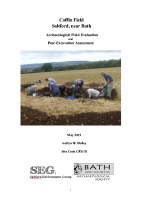 Saltford, Coffin Field 2019 Coffin Field, Saltford, near Bath, Archaeological Field Evaluation and Post-Excavation AssessmentRobin Holley
Saltford Environment Group (SEG) have been researching and recording the history of the village. As part of this research a field to the south of the village has been of particular archaeological interest. It is known locally as the Coffin Field. In 1948 a Roman stone coffin complete with a skeleton of a young man was found. Trial trenches unearthed pottery fragments, coins, nails, and utensils together with ‘oyster shells too numerous to record’. In recent years metal detectorists have discovered Roman pottery, glass. etc. In 2018 BACAS and SEG carried out an excavation. This report constitutes the findings from the excavation and post analysis/assessment of the finds recovered. The excavation was carried out between the 13th to 15th August 2018. 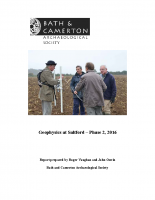 Saltford, Coffin Field 2017 Geophysics at Saltford – Phase 2, 2016Roger Vaughan and John Oswin
This was the second phase of a geophysical survey of Coffin Field to the south of Keynsham Manor, Saltford. The results suggest that there is a large structure, probably of Roman origin, at the far south of the field. It would appear to be encompassed within a pair of parallel ditches extending westwards. There would also appear to be a smaller structure in the northwest corner of the field. In the eastern portion of the field, the magnetometry has identified a feature which may possibly be a washing pool. 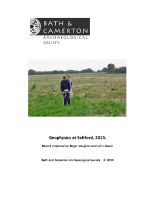 Saltford, Coffin Field 2016 Geophysics at Saltford, 2015Roger Vaughan and John Oswin
A geophysical survey of a field to the south of Keynsham Manor, Saltford was carried out jointly by BACAS and Saltford Environment Group. The survey indicated the possible presence of some prehistoric round houses in the northern portion of the field, and signs of what may be a Roman structure on higher ground to the south near to the site where a Roman coffin, complete with the skeleton of a young man, was discovered in 1948. 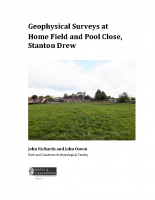 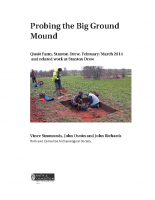 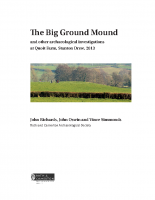 Stanton Drew 2013 The Big Ground Mound and other archaeological investigations at Quoit Farm, Stanton Drew, 2013John Richards, John Oswin and Vince Simmonds
We had carried out detailed surveys of the stone circles and the Cove but we had not looked at the outliers: the Tyning Stones and Hautville’s Quoit. We investigated the Quoit in 2012. We returned to Quoit Farm again in 2013 for the subject of this report, the Big Ground Mound

Stanton Drew 2013 Stanton Drew Stones – Overhead PhotosKeith Turner
High resolution overhead photos of all the stones in the three circles and the Cove. 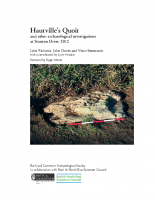 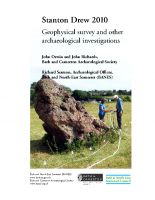 Stanton Drew 2011 Stanton Drew 2010: Geophysical survey and other archaeological investigationsJohn Oswin, John Richards and Richard Sermon
The completion of a high data density magnetometer survey over the whole of Stone Close has added much extra detail, including a new henge entrance, posthole settings and an area of activity just outside the circle to the south-east. In the SSW Circle, an EDM survey has shown how the circle was positioned very deliberately to occupy the small flat plateau, with views northwards across the other circles towards the River Chew, westwards to the Cove, and across the valleys to the south and east. At the Cove, the resistance surveys have added some reinforcement to the interpretation of a long barrow/chambered tomb, but the results are by no means conclusive. 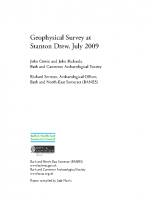 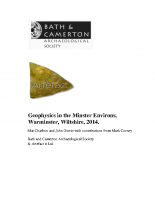 Warminster 2014 Geophysics in the Minster Environs, Warminster, Wiltshire, 2014Matthew Charlton and John Oswin
As part of the Warminster Heritage Lottery project, a number of geophysical surveys were conducted on various sites in the northern portion of Warminster town in Wiltshire, the research aim being to search for signs of occupation pre-dating the development of the medieval market town. The survey would also look for any possible church buildings away from the present minster church. There were a number of indications of possible earlier settlement, although these appeared to be prehistoric rather than pre-Norman. Limited surveying close to the church and observation of architectural features, suggested that any previous Minster church was most likely to be under or very close to the present church. 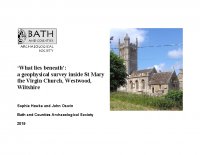 Westwood 2019 ‘What lies beneath’: a geophysical survey inside St Mary the Virgin Church, Westwood, WiltshireSophie Hawke and John Oswin
A wall memorial dating to 1824 inside St Mary the Virgin Church, Westwood, near Bradford on Avon Wiltshire, notes the presence of a vault. BACAS was asked to investigate whether this vault did indeed exist. Resistivity profiling was used inside and outside the church. The results demonstrated the presence of several vaults: two under the nave near to the memorial and another vault located under the chancel. There appears to be no record of this vault or its occupant. A further, deeper void was found below the tower, which may be a possible bell pit. An extra profile was taken just outside the church along the south wall. The results of this show the footings of the chancel, chancel arch and nave, together with the stone base of a flat grave slab. This was the first time BACAS had carried out a geophysical survey inside a church. Their methodology used inside the Roman Baths at Bath, proved to be successful at Westwood too.